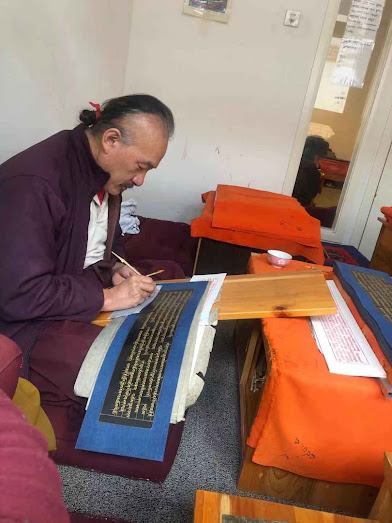 Tshampa Norbu Wangchuk, master calligrapher who wrote the master copy of the Constitution of Bhutan in gold, writing Kanjur in gold at the Royal Textile Academy, Thimphu (May 2021).

Students in the monastic schools and the erstwhile Semtokha Rigney School used to study calligraphy as one of the disciplines to be mastered. But it does not seem to be the case anymore. So, when His Majesty the King of Bhutan initiated the project to write more than 100 volumes of Kanjur (Buddhist canon) in gold few years ago, it was not so easy to find skilled calligraphers to undertake the task. That is when Tshampa Norbu Wangchuk and few other lay monks (Gomchens) from Bartsham Chador Lhakhang were called upon to join the project as gold calligraphers.

Calligraphy is called 'Yig-zo' in Bhutan, and it is an ancient art that can be traced to the introduction of Buddhism in Tibet.  It is does not feature in the 13 Arts and Crafts (zorig chusum) of Bhutan, but it is nonetheless a very important part of our rich tradition and culture that should be preserved.

A master copy of the Constitution of Bhutan adopted in 2008 as the country transitioned to democratic form of Government under constitutional monarchy was hand-written in gold using the traditional calligraphic method  and is preserved for posterity.

Dasho Sonam Kinga's 2010 article, "The Constitution – the King’s Gift: Defiling and Sanctifying a Sacred Gift", records the details of the signing of the Constitution of Bhutan as follows:

"The King signed 'The Constitution of the Kingdom of Bhutan' at 10.06 a.m. on 18 July 2008 in the kuenra (assembly hall of the state monk body) of Tashichho Dzong. There were three copies of the Constitution, one of which was done in gold. The King signed in all of them. Following him, the Prime Minister led the seventy two members of Parliament in signing the Constitution. The Chief Justice signed last."

"The day before the Constitution was signed, prayer ceremonies were organized in monastic institutions all over the country to solemnize the occasion. Before dusk, copies of the Constitution were taken inside the goenkhang of Tashichho Dzong and kept on its altar. .....Later, copies of the Constitution were taken to the kuenra from the goenkhang escorted by Dorji Lopen, who is considered to be the second highest abbot of the state monastic community. They were placed on the chhoethri located in front of the altar of the huge image of Buddha Shakya Muni."

The honour of writing the master copy of the Constitution  in gold fell upon Tshampa Norbu Wangchuk which he fulfilled very successfully. Tshampa is an accomplished lay Buddhist practitioner who has undergone practices such as the three year solitary retreats and received numerous teachings from great masters such as Dzongsar Khyentse Rinpoche, Dungse Thinley Norbu Rinpoche and Lama Pema Wangchen among others. Physically, he is a giant of a man, but is very humble and gentle in nature. 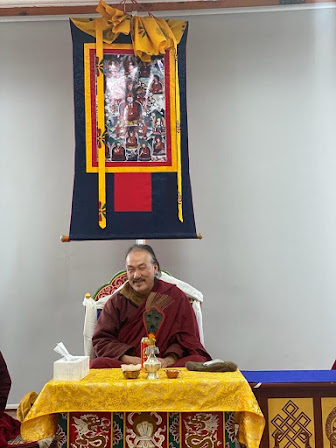 Tshampa Norbu Wangchuk, master calligrapher who wrote the master copy of the Constitution of Bhutan in gold. Picture takeb by the author in May 2021.
Tshampa Norbu Wangchuk also had the honour of writing many other important documents for the Royal Family of Bhutan in calligraphy. Currently, as a member of the ongoing project to write all the more than 100 volumes of Kanjur (Buddhist canon) in gold, he resides in Thimphu. The project is an initiative of His Majesty the King and the writing is taking place in the project office located at the Royal Textile Academy. The text is being laboriously written using real gold ink. "Gold powder imported from Japan is finer and produces better quality ink. The ones brought in from elsewhere like Nepal is not as good as the one from Japan," recounts Tshampa.
On being asked what kind of pen they use for writing Kajur in gold, Tshampa says that they used to use only bamboo pens in the past, but now, pens with metallic nibs are being used because they last longer. He says that the bamboo pens get their nibs soaked and dissolved sooner. 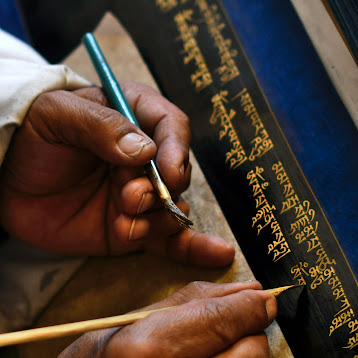 Calligrapher writing Kanjur in gold at the Royal Textile Academy, Bhutan (March 2021). Photo by: Chrys Fynn
It would be great if the Government can initiate activities to revive the interest of the public and the younger generation in this dying art of calligraphy. In Japan, where I spent nearly six years, calligraphy is practised as a living art, and even foreigners visiting Japan are made to try Japanese calligraphy in various festivals and cultural exchange events.
Related links:
https://kuenselonline.com/hh-the-je-khenpo-consecrates-kangyur-serdrema/

Thanks for sharing this wonderful post with us. This is more helpful for find the best and unique quality of it security services in the Bhutan Country.

How can I get in touch with Tshampa Norbu Wangchuk?

I am interested in carrying forward the Bhutanese calligraphy. In which case, I need some guidance from the experts like Tshampa La.

Tshampa Norbu Wangchuk,  master calligrapher who wrote the master copy of the Constitution of Bhutan in gold,  writing Kanjur in gold at the...