The National Memorial Chorten is one of the most important landmarks of Thimphu, the capital city of Bhutan. This beautiful stupa is a sanctuary for a lot of senior citizens and retirees who spend their time reciting mantras, circumbulating it or meditating in peace and calm.  It is also one of the must visit tourist attractions in Thimphu, and the venue of various religious events throughout the year. 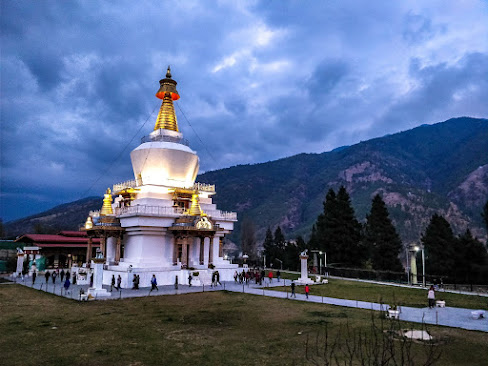 Picture of Thimphu Memorial Chorten (Courtesy: Wikimedia Commons)
People generally know it as a Chorten built in memory of His Majesty the Third King of Bhutan, His Majesty Jigme Dorji Wangchuck, who is fondly remembered as the father of modern Bhutan. It was during his reign that Bhutan opened up to the outside world and started the modern development with the first Five Year Plan in 1961. He passed away in 1972 at the young age of 43 years. In his 20 year reign, he achieved much for Bhutan including many important reforms in the legislative, executive and judicial arms of the Government.

His Majesty the Third King was also a great supporter of the Buddha Dharma. According to the biography of Her Majesty Ashi Phuntsho Choden (His Majesty the Third King’s mother), written by Lopen Yonten Phuntsho and published in 2013 (see cover picture below), the Third King wanted to build four chortens in the four corners of Bhutan and a Jangchub Chorten with Rigsum Gonpo as Nangten in Bumthang, Central Bhutan, for the peace and security of the country. When his Majesty shared his idea with Lam Gyalwang Nyima, one of the Lamas that His Majesty used to consult on religious matters, then serving as the Principal of Semtokha Rigzhung School, and asked him about his thoughts, Lam Gyalwang Nyima submitted to His Majesty that it was indeed very wonderful that His Majesty had thought about such a project that would greatly benefit all sentient beings in this degenerate age. Lam Gyalwang Nyima suggested to His Majesty that it would be best to consult the peerless master Dudjom Rinpoche Jigdral Yeshe Dorji, the one revered as the living representative of Guru Padmasambhava himself. At that time, Dudjom Rinpoche was residing in Kalimpong which is just few hundred kilometres from the Bhutan border in Phuentsholing. 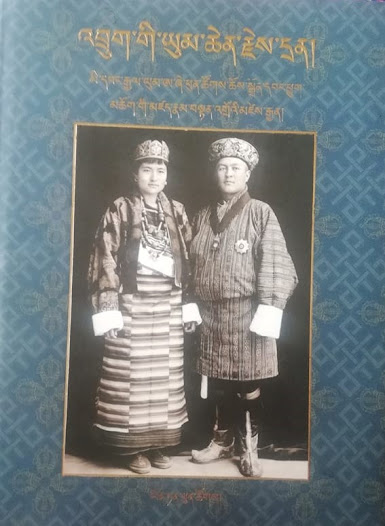 Front Cover of the Biography of Her Majesty Ashi Phuntsho Choden by Lopen Yonten Phuntsho
Accordingly, the Third King deputed Lam Gyalwang Nyima with a letter to go to Kalimpong to consult Dudjom Rinpoche. Dudjom Rinpoche, based on his spiritual contemplation and prediction, advised that building a Jangchub Chorten in Thimphu, capital city of Bhutan, with Ka-Gong-Phur-sum as the Nangten would be great for the world peace in general and the peace and security of Bhutan in particular. He further assured that he would personally ask his son, Dungsey Thinley Norbu Rinpoche to oversee its construction from start to finish.

Now, coming back to the Chorten construction, given the myriad responsibilities vying for His Majesty’s time and attention, the project could not be started before his Majesty’s untimely death in 1972. The biography of Ashi Phuntsho Choden by Lopen Yonten Phuntsho mentions that His Majesty asked his mother to complete this project after his death as his health was failing fast and he knew that he would not live too long.

Ashi Phuntsho Choden was an epitome of natural grace, beauty and compassion, and also well learned in Buddhist philosophy and grammar. A true Dharma practitioner and believed to be an embodiment of a dakini, people who served her in her old age recall how gentle, compassionate, understanding and generous she always was. His Majesty the Third King was her only surviving child, having lost a daughter at a very young age. Incidentally, Ashi Phuntsho Choden is a sister of our Queen Gyaltsuen Ashi Jetsun Pema's maternal grandfather.

Therefore according to the wishes of the Late King, the Chorten construction started under the patronage of Her Majesty Ashi Phuntsho Choden after he passed away. According to the biography of Ashi Phuntsho Choden, the ground-breaking ceremony (Salang Tendrel) for the construction was held on 10th September 1972 by Dujom Rinpoche and Dilgo Khyentse Rinpoche, coinciding with the 3rd day of the 8th month of the Water Male Rat Year as per the Bhutanese calendar.

Bartsham Lama Ugyen Namdrol (alias Lama Daupo) also recalls serving as an assistant for Dungsey Thinley Norbu Rinpoche one very early morning (before dawn) in the rain in performing a pre-construction ritual for the Chorten. "I had spent the night in the same house where Dungsey Rinpoche resided. It was a house inside the current RBP compound below the Chorten. We woke up very early, much before dawn and walked in the rain to the spot where the Chorten stands today. When Dungsey Rinpoche and I made it through the mud to perform the rituals from one side of the spot identified for the Chorten construction, Dilgo Khyentse Rinpoche was already there in one corner under a big umbrella chanting prayers." 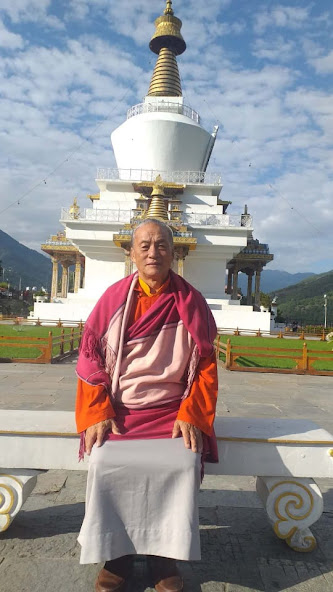 Bartsham Lama Ugyen Namdrol at the Memorial Chorten during the Phurpai Drubchen ceremony in October 2020 (Picture by Gomchen Ugyen Chophel of Bartsham Gomde)
The construction was overseen by Dungsey Thinley Norbu Rinpoche, son of Dudjom Rinpoche, and was completed in three years. It is quite remarkable that it was completed in such a short time, given so many intricately designed statues inside the Chorten. Even in this day and age, such projects take a long time, many stretching into five years or more.

Dudjom Rinpoche and his descendents continue to bless and benefit the Bhutanese people to this day, with his grandsons Dzongsar Khyentse Rinpoche and Garab Rinpoche working tirelessly to keep the flame of Buddha dharma burning bright in Bhutan, though they have great many followers outside Bhutan vying for their precious time and teachings.

The ground floor of the chorten contains the statues of Vajrakīlaya (ཕུར་པའི་ལྷ་ཚོགས), the middle floor is dedicated to Drubpa Kagyed (སྒྲུབ་པ་བཀའ་བརྒྱད་ not འབྲུག་པ་བཀའ་བརྒྱུད་ as sometimes mistaken) and the top floor is dedicated to Gongdü teachings (དགོངས་འདུས་) of Sangay Lingpa, as confirmed by Dr. Karma Phuntsho, a well-known Bhutanese scholar, and author of a comprehensive history of Bhutan titled 'History of Bhutan'. 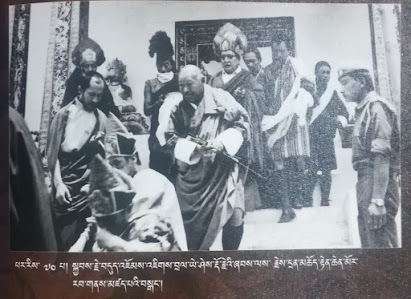 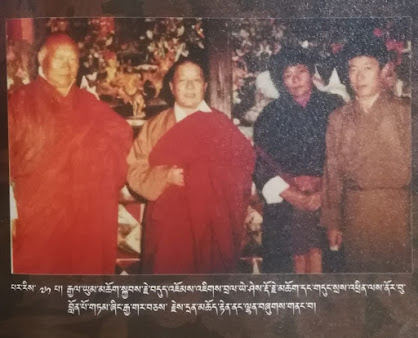 Key people behind the construction of the Memorial Chorten. Left to right: Lyonpo Tamzhing Jagar, Dudjom Rinpoche, HM Ashi Phuntsho Choden and Dungsey Thinley Norbu Rinpoche. (Picture source: Ashi Phuntsho Choden's Biography)
The following prayer, composed by Dudjom Rinpoche in dedication to the Chorten mention that it has the power to clear all obstacles and bestow good health on all devotees who circumbulate it as many times as they can. 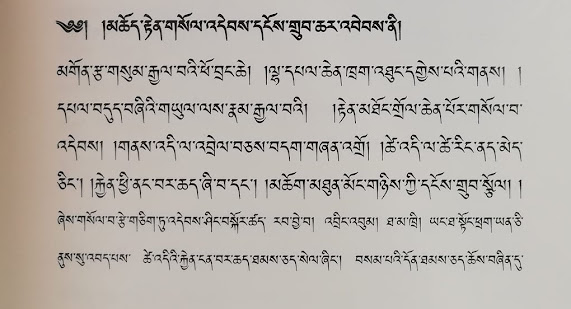 The following are the key people involved in the construction of this beautiful Chorten that was completed in three years, according to the biography of Ashi Phuntsho Choden:

6. Begarna Jigmela – maker of wood replica of Chorten as per design 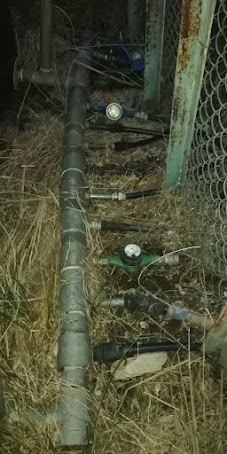