The Story of Monk Ravati

The Story of  Monk Ravati

The following story is written based on a teaching on ‘Lay Ju-dre’ (Law of Cause and Effect) given by Lama Ugyen Namdrol (popularly known as Lama Daupo) at his residence in Namseling, Thimphu in December 2019 when we visited him one evening.

Everything in this universe is bound by the law of cause and effect. There is no result without the cause. Everything that happens is a result of an interplay of many causes and conditions. In fact, if you analyze this, this is very scientific.
In Buddhism, we believe that all good and bad that happen to us are a result of various causes. We call this ‘karma’. But at the same time, karma is not something fixed. We can change our karma through our own actions in this life – for good or bad.
To drive home the above point, Lama narrated the following story. He said that it is based on the original story found in the well known book, ‘The Words of My Perfect Teacher’ written by Patrul Rinpoche (1808 – 1887). 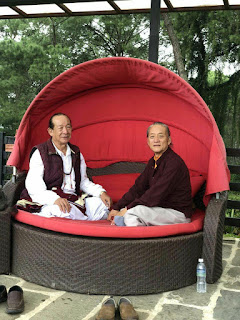 Lama Ugyen Namdrol on the right side in red (popularly known as Lama Daupo) and Lama Namgyal, two of the seniormost disciples of late Dudjom Rinpoche from Bartsham (Picture taken in Nepal sometime in 2018 during the marriage ceremony of Dudjom Yangsi Tenzin Yeshe Dorji and his consort).
Long ago, there lived a monk called Ravati who had many disciples. He was clairvoyant and had miraculous powers.

One day he was in a retreat, far away from human settlement, in a dense stretch of woodland. He was dyeing his monk’s robes with saffron.

At the same time, a layman living in a village below the forest was searching for a calf that had strayed. He saw smoke rising up from the thick forest, and went to see what was going on.

Finding the monk stoking his fire, he asked: “what are you doing?”

The layman said that he had lost his calf and enquired if he had come across it by chance. The monk said he had not seen any cows or calves around there.

The layman then said that he actually suspected that the monk might have killed the calf and was cooking the meat in the cauldron.

At this, the good monk almost lost consciousness from the shock. Then he sighed and said, “Oh dear, how can you say that to me? I cannot do such a thing even in my wildest dreams. If you don’t believe me, please open the lid and see what is inside.”

It is said that other people were also called in to have a look, and they too saw the calf's meat in the cauldron.

The layman led the monk off and handed him over to the king, saying, “Sir, this monk stole my calf and killed it.  Please punish him.”

The king had Ravati thrown into a jail.

However, several days later it happened that the layman’s cow found her missing calf by herself. The layman went back to see the king and said, “Sir, the monk did not steal my calf after all; please release him.”

But the king got distracted and forgot to have Ravati freed. For six months he did nothing about it.

Then one day a large group of the monks’ disciplines, who had themselves attained miraculous powers, came flying through the air and landed in front of the king.

“Ravati is a pure and innocent monk,” they said to the king. “Please set him free”

The king went to release the monk, and when he saw Ravati’s debilitated condition he was filled with great remorse.

“I meant to come sooner, but I left it so long,” he exclaimed. “I have committed a terrible sin!”

“No harm has been done,” said the monk. “It was all the fruit of my own deeds.”

“What kind of deeds?” asked the King.

“During a past life I was a thief, and once I stole a calf and killed it. When the owner came after me, I ran off, leaving the butcher's knife next to an ascetic who happened to be meditating in a thicket."

He continued,  "The owner took the ascetic and threw him into a pit for six days. As the fully matured effect of my action, I have already been through numerous lives of suffering in the lower realms. The sufferings I have now just experienced in this life were the last of them.”
So it is believed, the power of karma for the evil that you do, will never leave you. The same goes for the good that you do.

cigay
A believer of life-long learning and social observer.